Between finding an apartment (Hello, Dublin housing crisis), settling in, and applying for jobs, it took me a week or so to really find my footing in Ireland. Not that I’m completely stable yet. At all.

But I was ready for my first full Irish weekend, seeing more than just Dublin’s city centre, the walls of my room, and the inside of a grocery store.

I thought I was going to fall and die at least four times as I crab-walked down the mossy, slippery side of the Dun Laoghaire pier in my bare feet. My shoes and mismatched socks had been left behind with my friend, safe from the waves rolling in. I laughed as my toes slid over algae, my fingers clenching around a slick rock to keep me from falling fully onto the wet ground.

I’d started the descent thinking I’d end up standing in the Atlantic Ocean; Google later told me it was actually the Irish Sea. [Geography has never been one of my strengths. Oops.] Either way, resting with the icy water lapping over my feet and up my calves, nothing visible ahead but clear blue water, pale cloudy sky, and a pristine white-sailed boat, the view was worth it. 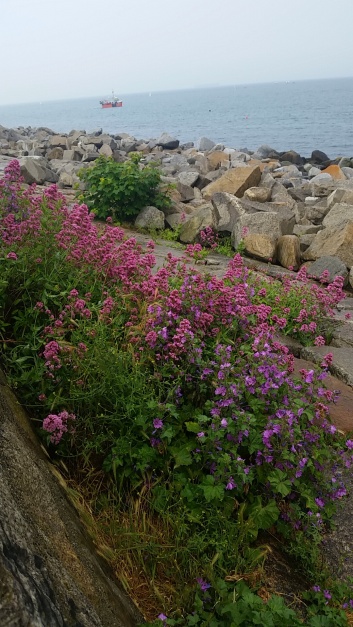 This was a sight most people will never see, and it took a six euro train ticket for me to get to it.It did nearly cost me a sock, though [shout out to Jenna for going back to find it].

After a few moments of trying to grasp that this was reality, I turned, posed for a picture, and scurried back up to my friend. I kept my shoes off, though, as we walked along. I wasn’t ready to wipe away the water – water my family had sailed through generations ago.

The rain started coming down as we kept moving along the pier, as it tends to here, but I had one more sight to see. Rumor has it Samuel Beckett – the Irish playwright, novelist, and poet – had an “artistic epiphany” on this pier and, when you’re Samuel Beckett, you get a plaque to mark the spot where your great ideas bloomed. I wasn’t quite sure where to find it, so after a lap around the lighthouse, I was a bit soaked when I chanced upon it.

It’s a fairly innocuous sight, just a greenish rectangle, the edges and raised text still a dark bronze. On it are words from Krapp’s Last Tape, believed to be inspired by this very spot:

“…great granite rocks the foam flying up in the light of the lighthouse and the wind-gauge spinning like a propeller, clear to me at last…”

How Beckett could have been inspired by this place was obvious. Even hurrying away from it to seek shelter inside – I could have wrung my clothes out by now – lines of a soon-to-be-written poem had already filled my head.

As I passed, a group of preteens ate ice cream cones and looked at their phones. Odd that growing up in such a place makes it harder to see.

On my little sister’s eighteenth birthday, I was almost 4,000 miles away climbing a mountain. 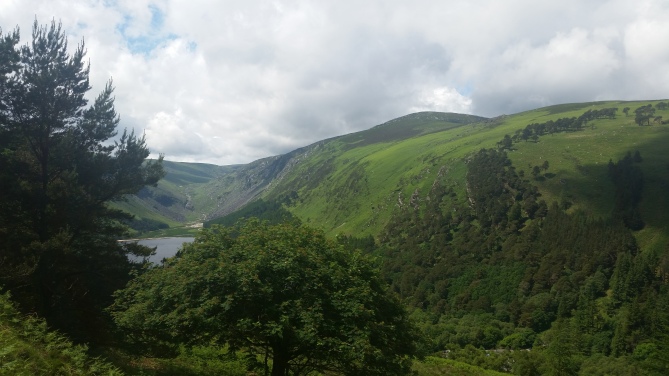 The Wicklow Mountains, just South of Dublin, boast shining lakes, towering cliffs, and a cathedral built in the 1100s. There’s also a gift shop, of course, selling coasters with family crests. Luckily, my parents went with a traditional Irish name for my sister, so I could buy her coasters with “REILLY” scrawled on a golden ribbon beneath two upright lions on a green background, a hand held between them, dripping red blood droplets.

It wasn’t the most cheerful gift I could have given, but it was something she didn’t have. I read one legend that said the severed hand represented a brother who had chopped off his own hand and thrown it to shore from his boat, laying claim to the land first even though his brother had rowed faster and should have beat him. The Reilly clan is somewhat known for sibling rivalry – I’ll gloss over that when I give it to her.

Finding the gift was a nice cap to a day that had included hiking five miles up and down a mountain. The weather had cooperated, a breeze and light rain helping keep me from sweating through my jacket as I climbed.

It’s a surreal feeling, being on top of the world. I’d spent the week before in Dublin, but looking out at endless green, broken only by a crystal lake, sheep bleating from the valley below, I was seeing the Ireland I’d imagined. For a tiny country, it was showing me more than I’d dreamed.

Even getting lost on the trails for an hour, doubling back and pausing to simply turn in a circle a few times as rain darkened my hair, it was a profound experience. The closest I’d been to a mountain before this was staring up at one as I drove past or down at one as I flew above; those times are incomparable.

I thought I’d had enough excitement for the day after the descent, but doing some exploring near the national park’s visitors’ center let me know I wasn’t done. The tower jutting up against the horizon had caught my eye on the way in, but I’d thought that was all it was. I was wrong. 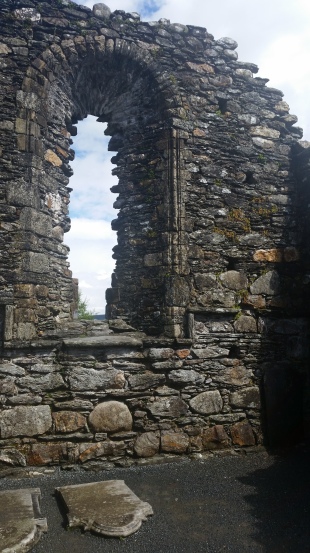 The ruins of Glendalough – national landmarks, according to plaques – housed monks back in the day, founded by St. Kevin in the sixth century. It used to be one of the country’s first cathedrals, a beauty in its prime with brick archways and huge windows to light the alter. English forces destroyed the settlement in 1389, but it still holds religious significance.

Graves were the main attraction, though. I was in the presence of history, quite literally. Dates on the tombstones went as far back as the 1600s, the names barely legible against the worn, nearly-smooth stone.

I could take souvenirs home, but I could never capture the feeling of standing in a place that had hosted weddings and funerals for nearly a thousand years.