Tucked away on the right-hand side of a dark stone church, in a wooden box beneath a red-robed statue, are the remains of Saint Valentine, including a small amount of his blood. 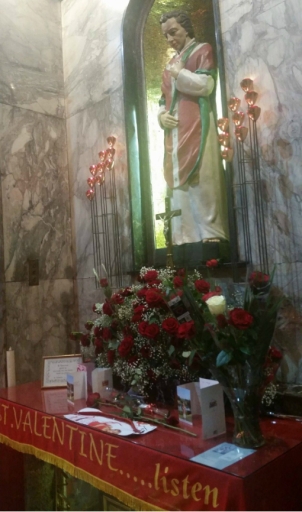 Whitefriar Street Church in Dublin is not flashy or grand, overshadowed by St. Patrick’s Cathedral just over a block away, but on February 14th the pews welcome plenty of people. The Carmelite church has contained the relics of St. Valentine since 1836, when they were gifted by Pope Gregory XVI.

I’ll admit I think Valentine’s Day is one of the worst holidays and may have called it pointless a time or two, but there was no way I wasn’t going to visit the saint’s remains on his feast day.

There was a man dressed as St. Valentine standing on a stool out front when I arrived, posing for pictures and asking for spare change. Believe it or not, that didn’t make me feel more in the holiday spirit.

The inside of the church was fairly plain, as far as ancient churches go, but there were dozens of candles flickering in one corner, letting visitors know exactly where to go.

For some reason, I expected the display to be intimidating; it was not.

There is an elevated statue of St. Valentine, wearing his signature red, with handmade Valentine’s Day cards and a beautiful bouquet of roses at his feet. He looks down on the gifts — and on himself. 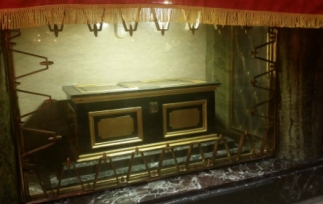 Build into the table below the statue, his remains are in a somewhat small, rectangular wooden box with gold detailing. There’s a golden plague on the wall that explains how his remains were transported to Dublin, but it’s faded and difficult to read. A red tapestry on the altar reads, in gold thread, ‘ST. VALENTINE…Listen.’

And many people hope he is.

An older woman, there alone, lights a candle and places her hand against the glass protecting his remains.

A young man and woman, holding hands, gaze up at the statue for a moment, then smile at each other.

A middle-aged man kneels on the marble ground silently for several minutes, stands, lights a candle, and leaves the church.

There are, of course, several people taking photos — myself included — but there are also many people here because, it seems, they genuinely believe St. Valentine can help them.

So Valentine’s Day will never be my favorite holiday, but maybe I’ll grumble about it a little less next year.