I couldn’t study writing in England without making the trek out to  Stratford-Upon-Avon within the first month.

London may have The Globe, but Stratford has Shakespeare’s birth place, his wife’s old home, his family home, the Church where he married and was baptized, his prime writing spot, and, of course, his body.

Shakespeare’s grave is shockingly drab. He must’ve paid a pretty penny for the prime location in the rear of Holy Trinity Church — and it’ll cost you £3 to see it.

First is Anne Hathaway’s grave, then Shakespeare. Next to him, for reasons I still haven’t worked out, is his granddaughter’s first husband. He couldn’t have known who’d come to rest on his other side, but Shakespeare knew where his body was going and wanted it kept there; his engraved epitaph ends “curst be he that moves my bones.”

That inscription has long since faded, though the other graves are still largely legible. Shakespeare’s looks sanded smooth; I imagine loads of people wanted to rub that for a bit of luck (or a transfer of talent) before the Church blocked it.

Knowing his bones were below was thrilling, but I was just as interested in his bust mounted on the left wall. Supposedly, it was done while Anne was still alive, making it one of the most accurate depictions. Artists must have adopted it as the standard over the years, as he looks quite like most images I’ve seen. Expect with less hair; Shakespeare may have only lived to 52, but the top of his head could’ve been 80.

A fifteen minute walk from his personal remains are the very public remains of his birth spot. From the outside the house is in remarkably good shape, straight dark wood over flat beige slats, a too-modern fence keeping visitors from touching. Inside it feels much more age-appropriate, with slanting walls, low doorways, uneven floors, and gorgeous brick fireplaces. 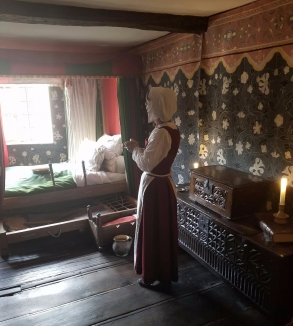 It’s well preserved and would seem out of place anywhere else, but Stratford has put in the work to maintain the feel of Shakespeare’s time; just outside the modernized city centre is “Old Town,” meant to showcase the city as Shakespeare would have seen it. It helps give the birth place a sense of being commonplace, as it would have been when Shakespeare was born. No one could have known who he’d become, what he would grow to represent, so the Shakespeare Birthplace Trust highlights the normalcy while showcasing the incredible things to come.

I bought an eraser for seventy pence.

There are three theatres Shakespeare would have frequented in the city, along with “Shakespeare’s New Place,” the sight of his residence as an adult.

The house, though the largest in Stratford when Shakespeare lived there, is gone now, replaced by a beautiful garden filled with statues inspired by his work. The Trust has placed a chair and writing desk in the courtyard where, using the layout of the house, they believe Shakespeare would have written many of his greatest works. I’ll admit sitting in it gave me a thrill, though I can’t say it made me a better writer. 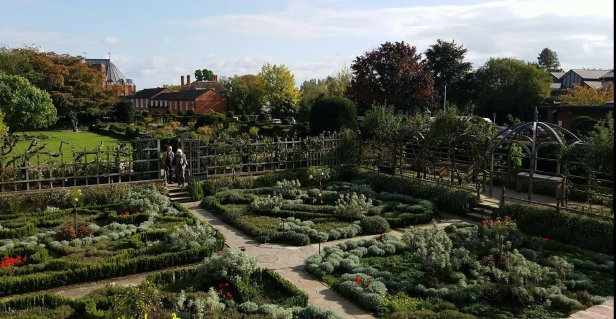 Inside, in a small museum-like dedication to the family, is Shakespeare’s sealing ring with the family emblem. It’s quite amazing to see so small an item of such significance, to imagine the letters it closed.

A bit outside Stratford, less than ten minutes by car, is Anne Hathaway’s Cottage. Because Shakespeare never lived there, I was least excited about this house. I shouldn’t have been.

The house is a gem, filled with more artifacts and furniture from the time than any of the other sites. Anne’s family still lived there until 1911, according to one of the workers, so much of the interior has been preserved, including the original chair, known as the “Courting Chair” or “Shakespeare’s Chair,” where he sat when visiting Anne during their “courtship.” Before he got her pregnant and they had a quick wedding six months before welcoming their first child. I’ll fully admit, while there I wondered if I was standing in a room where Shakespeare and Anne conceived a child. Learning the bedroom has a bed made from the remains of their marital bed did nothing to lessen my voyeuristic curiosity.

I’ll never know if I was in the Conception Room™, but I left with a richer imagining of Shakespeare’s life.