If you watched Gilmore Girls, you probably remember Lane Kim’s reaction to her honeymoon. If not, let me give you the gist.

When Lane gets back from Mexico, she says something to Rory along the lines of “So now I know. That it’s bad, that it’s terrible. Sex. You can drop the act…In a way, I’m impressed with the depth of the conspiracy.”

In Milan, I felt exactly the same way. 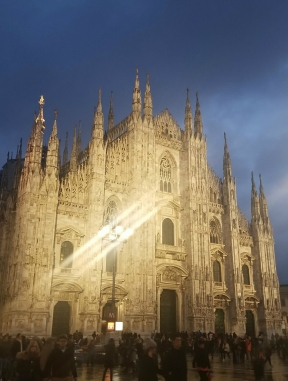 Milan has this reputation as powerful, beautiful and enchanting. There’s Milan fashion week and countless photographers and models and designers flood the city with their art.

I don’t know the origin of that reputation, but it certainly feels like a worldwide conspiracy. I can’t imagine the biggest names in fashion walking those streets, let alone drawing inspiration from them.

Maybe it was the rain or just an off day, but Milan was easily the worst Italian city I’ve travelled to. That’s not to say it was terrible — there are so many amazing cities in Italy that the standards are high — but it’s just fine. I had a decent time, but it won’t stick out as a memorable holiday and I have no intention of returning.

I spent only one day there, with my sister. It was the first time she’d ever been to Italy and I had been waxing poetic about the country’s beauty, history, and cuisine since we booked the trip. But Milan was not a good starting point.

Initially it seemed great. Arriving at the train station, we stowed our luggage and went for lunch. We both had delicious, cheesy lasagna dishes at a small place called SorryMama. It is a newer restaurant, but it had fantastic reviews and, after eating, we knew why.

It went downhill after that.

“Is all of Italy like this?” she asked with poorly masked apprehension when we were walking into the city centre, passing blocks and blocks of litter-covered pavement that led to dark doorways of dingy buildings.

I quickly reassured her everywhere else would be better.

Milan had one major thing going for it: Duomo di Milano. I’ve seen a lot of churches in a lot of countries and this one is a standout. It is impossibly large, beautifully sharp, and absolutely dominates the surrounding buildings.

The cathedral is next to Milan’s famous shopping street, with its ornate gold ceiling, and the neighboring blocks of shops. Again, they were good, but not spectacular.

For one of the most fashionable cities in the world, I expected more. I felt like Tim Gunn when a Project Runway contestant sends out a garment with an unfinished hem: underwhelmed.